The route starts in Paynters Lane near the junction with Treforthlan.  From here head along Paynters Lane north west towards the five cross roads junction at Paynters Lane End.  On your left there is the village’s second Methodist Chapel which was built in 1890 at a cost of £1,086.00.  The stone for the chapel was obtained from an old mine building.

On reaching Colborne Avenue, you cross the route of the original mineral railway line from Portreath Harbour to Hayle Harbour.  The grassy triangle is the site of the original signal box which was still standing until the 1960s.

At the cross roads with Merrose Lane, please note to your right Mary’s Well 1888.  Mary’s Well was named after the wife of Gustavus Lambert Basset whose family for hundreds of years owned Tehidy House and much of the surrounding land and mines around the area.

Continue along Alexandra Road to the junction with Cot Road.  Opposite is the East Lodge, a rare thatched lodge. The line of Alexandra Road continues alongside the golf course to the front door of the Great House at Tehidy.

Turn right along Cot Road and take the footpath to your right just before the new telephone exchange, opposite the entrance to Tehidy Woods car park.  The telephone exchange was built in the early 1970s and it caters for the old Portreath and Illogan telephone codes.

Following the footpath, you will again pass over the dismantled railway, you will go into the new holiday development called Gwel an Mor (translation – Seaview).  There is a café/restaurant and swimming pool at Gwel an Mor.

Follow the route through Feadon Valley.  You will arrive at Primrose Terrace, Portreath.  As you go along Primrose Terrace you will pass, on your left Glenfeadon House, which was the home of the Bain family who owned Portreath Harbour, the ships and shipping rights.  In 1889, David Wise Bain was elected as the first County Councillor for Illogan.  Mineral ore was taken out of Portreath Harbour and coal and pit props were brought in and then transported by the railway line, which you have now crossed twice.  The railway line ran from the 1840s until the 1930s.

Pass under the railway tunnel into the roadways of Portreath.  Follow Beach Road into the car park by the Atlantic Café opposite the beach hut toilets.  Up until the 1960s the original tin streaming sheds were on the beach.

Retrace your steps along Beach Road to Portreath Square, turn right into Penberthy Road.  You will pass the Millenium Hall which was one of two former Methodist Chapels.  You will also pass St. Mary’s C of E daughter Church to Illogan Parish; the war memorial bears first and second world war casualties and three later service personnel.  The school was built in 1890 and was expanded in the 1990s and has doubled in size in the last thirty years.  Penberthy Road follows alongside the second mineral railway line which was built in 1809 and finished in the 1870s; this railway was only ever a horse drawn railway line.  The railway line is now a cycle path which goes to Devoran on the south coast.  Tolticken Hill is the entrance to RAF Portreath.  RAF Portreath was a Hurricane fighter base in World War II and is still operational today.

The first building in Bridge is the Institute.  Turn right over the bridge to the pub, The Bridge Inn.  Until recent times the bridge was the first crossing point from the sea.  On the hill above the Bridge Inn is the Methodist Chapel.  You are on the Great Parish Road which goes to Trevenson Church, Pool and thence to Camborne.

Continue up Bridge Hill and re-enter the parish of Illogan at the 30mph sign.  Watergate is on the original road to Redruth.  The valley is called Labour in Vain which is a corruption of the Cornish language name ‘Lan bryn byghan’ which means ‘the little brow of the hill belonging to the church’.

When you come to the junction turn left onto Robartes Terrace.  ‘Ventonraze’ on the left is thought by some to be a version of fountains of grace.  The spring at the bottom until recently the water used to baptize babies in Church , otherwise the much closer rectory wells was used.

Continue up Robartes Terrace past Harris Memorial Surgery which is adjacent to the Glebe Field.  This building was erected as a ‘gentleman’s reading room’ at the end of the nineteenth century.

Continue past Manningham Wood.  Manningham Community Woodland was created in 2004 from an area of derelict land hidden behind locked and rusting gates for decades after Manningham House, to which the land belonged, ceased being the rectory.  With the help of funding from the National Lottery Fund, and under the stewardship of Illogan Parish Council, it was cleared of brambles, bracken, sycamore, laurel, rhododendron and some fly-tipped rubbish; new paths were laid and areas cleared of dangerous trees for future public use.  It was officially opened in October 2004, by Lady Mary Holborrow, as a Community Doorstep Green, under the vision:  “A woodland for all, accessible by everyone – nature on our doorstep.”

Robartes Arms to the right is named after the Robartes family of Lanhydrock, whose daughter married into the Basset family.

At the double roundabout go across to Paynters Lane and return to the starting point of the trail.

Parking – parking on the side of the road.

Eating and shopping – village store in the centre of Illogan.

Public houses – Near village centre Robartes Arms. The Bridge Inn on the way to Portreath. In Portreath The Waterfront Inn and the Basset Arms.

The parish church was dedicated to St Illogan (Ylloganus or Euluganus) and St Edmund; the earliest reliable reference, dated 1235, refers to the Ecclesia of Eglossalau. By 1844, the church had become too small to serve a vastly increasing mining population, so a new church was built to the designs of J. P. St Aubyn. 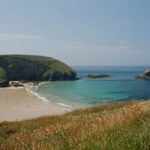 The name Portreath (meaning “sandy cove”) was first recorded in 1485 and tin streaming in the valley was recorded from 1602. Devon contractor Samuel Nott, was engaged to build the first mole (or quay) in 1713 on the western side of the beach, near Amy’s Point.

Nancekuke Common to the north of the village, is now a radar station operated by the RAF, but was originally built in 1940 to be the RAF’s main fighter airfield in Cornwall during WW2.